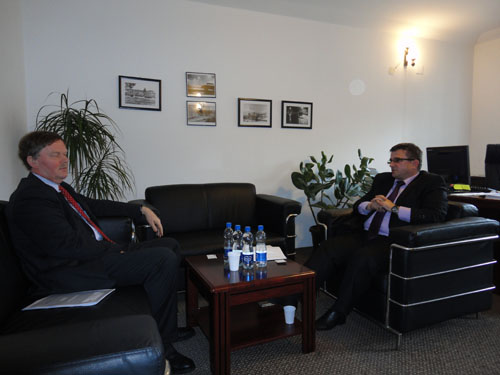 Director of the Anti-Corruption Agency Mr. Hasan Preteni had a meeting with the Dutch ambassador in Prishtina, Mr. Robert Bosch. Mr. Preteni informed the Ambassador on the continuing efforts of the Agency in the fight against corruption.

At this meeting were discussed faster and better opportunities which Kosovo must find to reduce corruption, while the two interlocutors agreed that this is a very serious problem which is extremely damaging the image of Kosovo.
Ambassador Bosch in turn encouraged the Agency for the work which was presented in the 2010 annual report, and expressed full readiness of the Dutch government to assist Kosovo in overcoming the problems that reduce the level of corruption. The European Union, he said, wants Kosovo to strengthen independent institutions that deal with law enforcement (such as the Agency) in order for the country to provide rule of law and order.

Go back to the other news